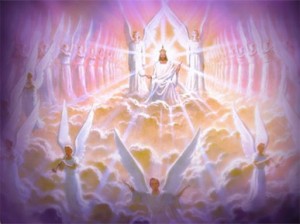 The event of all times! The key theme of the Word of God! None will miss it! You cannot hide from it! You cannot escape it and regardless of where you turn, it will find you! When it happens, all will know, and those who are Christ’s will be caught up to meet Him in the air. It is soon, even at the door. There are two distinct ways of approaching it: in boldness to life or in terror to death. Why not decide to face it unto life rather than onto death. Like it or not, afraid or not, knowingly or not, it is coming. How will you stand on that great day?

CERTAINTY OF THE SECOND COMING

1.  Will Jesus return for His people?

“Christ was once offered to bear the sins of many; and unto them that look for him shall he ______ the second time without sin unto salvation,” (Heb. 9:28).

2.  How does Jesus assure us of His return?

3.  How did Jesus assure John of His return?

SIGNS OF HIS COMING 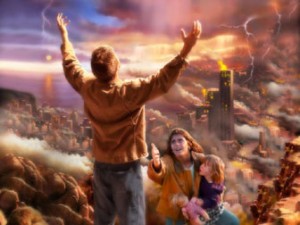 The Bible gives telltale signs of the second coming of Christ. These signs will be witnessed in the economic, political, scientific, physical and religious worlds so that all will know.

4.  Where will the signs appear?

5.  When did Jesus say that the signs would begin to happen?

NOTE: Daniel had prophesied that the tribulation would last 1260 years and that the saints would be given into the hands of the beast. This period began in 538 A.D. and ending exactly on time, 1260 years later, in 1798 A.D. with the capture and imprisonment of the Pope Pius VI by Napoleon’s General Louis Alexandre Berthier. (See Microsoft Bookshelf 1995, 1798 Political Events. Also, look up Pope Pius VI on the web.)

6.  What did John says would happen to the sun, moon and stars?

NOTE: Many believe that these signs are yet to come; however, the first signs in the sky occurred at the end of persecution and just prior to the close of tribulation in 1798. On May 19, 1780, the sun was darkened and that same night the moon appeared as blood. (Actually notes from that day). Then on November 13, 1833, the heavens seemed ablaze as the greatest meteoric shower ever to be recorded was observed over North America. Meteors were falling at a rate of 60,000 per hour.

7.  What would happen on the earth?

NOTE: On November 1, 1755, The Great Lisbon earthquake affected almost all of Europe. Tens of thousands lost their lives on land, while many drowned because of a tsunami that followed. The day ended with a massive fire that burnt yet another 10,000 plus to death. (See Scientific American or National Geophysical Data Center (NOVA.)

8.  How is the worldwide economy described?

“Go to now, ye rich men, weep and howl for your __________ that shall come upon you. Your riches are corrupted, and your garments are motheaten. Your gold and silver is cankered…Ye have heaped treasure together for the last days…you kept back by fraud,” (James 5:1-4).

9.  What will be the political condition?

NOTE: Like never before in History, knowledge is increasing at a rapid pace. We have gone from desktop computers to handheld and from getting lost to Global Positioning Devices on our cell phones.

NOTE: Many attend church not because they love God or even because they believe him, but rather because they want to be called Christians. Today, in the church, you have many who do not believe that God created the world in seven days, while others do not believe he forbids homosexuality. Still, many refuse to accept that His law never changes although He says, “It is easier for heaven and earth to pass, than one tittle of the law to fail” (Luke 16:17).

HOW WILL HE RETURN

Although there are many teachings as to the manner of Christ Second Coming, the Bible leaves no room for doubt as to the way in which Christ will return the.

NOTE: Christ does not appear secretly to the saved, but to every living soul on the earth: just and unjust.

NOTE: While many churches teach the Secret Rapture, the Bible not only says that Christ Second Coming will be visible by all, but it will be extremely loud. So loud in-fact, that it wakes the dead.

“While they beheld, he was taken up; and a cloud received him out of their sight. And while they looked stedfastly toward heaven…two men stood by them in white apparel; Which also said, Ye men of Galilee, why stand ye gazing up into heaven? This same Jesus, which is ______  ___ from you into heaven, shall so come in _____  ________ as ye have seen him go into heaven” (Acts 1:9-11).

NOTE: Jesus will take us to heaven when at His Second Coming.

18.  Do you understand that when Christ returns it will not be a secret and all will see Him?