Sardis was the next of the churches to receive a message from Jesus. The Sardis church period begins approximately 1517 and extending possibly to 1798. It is the Reformation period of the church during which time the great reformers like Luther, Knox, Calvin and the like protested the abuses and false doctrines that had crept into the Roman Church.

“And unto the angel of the church in Sardis write; These things saith he that hath the seven Spirits of God, and the seven stars; I know thy works, that thou hast a name that thou livest, and art dead.” (Revelation 3:1)

NOTE: Interestingly, many of the Protestants churches that left Roman lapsed back into formal structures that resembled Roman Catholicism. This happened toward the end of this period of church history.

“Be watchful, and strengthen the things which remain, that are ready to die: for I have not found thy works perfect before God.” (Revelation 3:2)

NOTE: The reformers did not completely separate from Catholicism. After a while, after the initial excited had passed, many churches reverted back to following doctrines of the fallen church. Subsequently, the reformation movement never reached its full potential.

“He that overcometh, the same shall be clothed in white raiment; and I will not blot out his name out of the book of life, but I will confess his name before my Father, and before his angels.” (Revelation 3:5)

NOTE: This verse destroys the idea of “Once Saved Always Saved.” It reveals that a person’s name can be blotted out of the book of life.

“I know thy works: behold, I have set before thee an open door, and no man can shut it: for thou hast a little strength, and hast kept my word, and hast not denied my name.” (Revelation 3:8)

NOTE: The Philadelphia period of church history is the one just before the last period – Laodicea. Hence, it must refer to a period of relatively modern times as far as the prophetic application is concerned. Many scholars believe that this period would describe the church from the late 1700s through the Great Second Advent Movement of the 1830s and early 40s through 1844.

NOTE: Many during this time were put out of their churches simply for believing in the doctrine of Jesus’ soon return!

“Because thou hast kept the word of my patience, I also will keep thee from the hour of temptation, which shall come upon all the world, to try them that dwell upon the earth.” (Revelation 3:10)

NOTE: This refers to the great test that will come upon the world in the last days. The last days of the church are represented by the Laodicean period which we are now in! Those of the Philadelphia period fell asleep in Jesus before the trials of the last days. But God’s grace will get us through all that shall come upon the earth! See Psalm 91.

“Behold, I come quickly: hold that fast which thou hast, that no man take thy crown.” (Revelation 3:11)

NOTE: This verse along with many others shows that it is possible to make shipwreck of faith and lose salvation. If we do not maintain a close relationship with Jesus! Jesus said “he that endureth to the end, the same shall be saved.” See Matthew 10:22 & Hebrews 10:26-31.

NOTE: We must be overcomers in Jesus and not just drift along with the tide! Jesus will seal forever those who overcome through His blood and the word of their testimony. See Revelation 12:11. Having a testimony means having a personal experience with Jesus Christ! 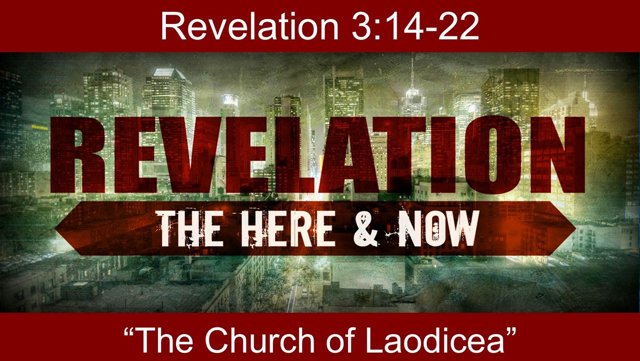 “And unto the angel of the church of the Laodiceans write; These things saith the Amen, the faithful and true witness, the beginning of the creation of God” (Revelation 3:14).

NOTE: The church symbolizes the last church on the earth before Jesus returns. Christians living today are included in this Laodicean period. We should especially heed the words of Jesus in this section of the book of Revelation because it comes from “the faithful and true Witness”!

Also, notice that Jesus calls Himself the “beginning of the creation of God” in this verse. Some try to use this text to show that Jesus was a created Being. But the word translated “beginning” here is more accurately “beginning” here is more accurately translated “origin” as most study Bibles show. Jesus was the One who originated all of creation. This agrees perfectly with Colossians 1:16-17, “For by him were all things created, that are in heaven, and that are in earth, visible and invisible, whether they be thrones, or dominions, or principalities, or powers: all things were created by him, and for him: And he is before all things, and by him all things consist.”