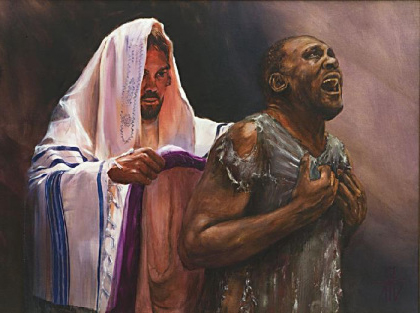 The Bible teaches that justification or saving righteousness comes by faith in what Jesus has done on Calvary’s cross. It is impossible for man to make himself righteous, or for man to save himself. By faith he must accept the righteousness of Christ on his behalf, and by faith the sinner is then declared righteous. This is imputed righteousness. Then as the forgiven sinner continues in a relationship with the Messiah, he or she is given “imparted” righteousness through the power of the Holy Spirit enabling him or her to form a character progressively more and more like the Savior’s

“Yea doubtless, and I count all things but loss for the excellency of the knowledge of Christ Jesus my Lord: for whom I have suffered the loss of all things, and do count them but dung, that I may win Christ, And be found in him, not having mine ___   ____________, which is of the law, but that which is through the faith of Christ, the righteousness which is of God by faith.”

If you maintain your own righteousness, you cannot receive Christ’s righteousness. It is one or the other. It both.

“For as by one man’s disobedience many were made sinners, so by the obedience of one shall many be made righteous. That as sin hath reigned unto death, even so might grace reign through righteousness unto eternal life by _______ Christ our Lord.”

It is the obedience of Jesus that is credited to you, the repentant sinner that makes you righteous.

You haven’t done anything when you do the things you should have done all along.

“____ by works of righteousness which we have done, but according to his mercy he saved us, by the washing of regeneration, and renewing of the Holy Ghost.”

5.  According to the same verse, what am I saved by?

“If you would gather together everything that is good and holy and noble and lovely in man and then present the subject to the angels of God as acting a part in the salvation of the human soul or in merit, the proposition would be rejected as treason . . . any works that man can render to God will be far less than nothingness. My requests are made acceptable only because they are laid upon Christ’s righteousness. The idea of doing anything to merit the grace of pardon is fallacy from beginning to end. “Lord, in my hand no price I bring, simply to Thy cross I cling.” (Ellen G. White, Faith and Works, p. 24)

“But we are all as an unclean thing, and all our righteousnesses are as _________ rags; and we all do fade as a leaf; and our iniquities, like the wind, have taken us away.”

“In his days Judah shall be saved, and Israel shall dwell safely: and this is his name whereby he shall be called, THE ______ OUR RIGHTEOUSNESS.” “For Christ is the end of the law for ____________ to every one that believeth.”

Grace is defined as “unmerited favor.” You do not deserve it; rather, you deserve death because the “wages of sin is death.” But, because of God’s grace and mercy, and Christ’s death on the cross, you can be forgiven and pardoned. Subsequently, you can walk away free from condemnation of the law.

The world “end” is better translated “goal.” The goal of God’s Law is to lead you to the Savior who forgives you and presents you without spot or wrinkle.

“Being justified __________ by his grace through the redemption that is in Christ Jesus.”

Salvation is a free gift of God. You cannot pay for this unspeakable gift. If you could, it would require your life.

Many well intentioned individuals are trying to establish their own righteousness. They are trying to be saved by: eating certain foods, wearing particular clothe, returning more than a faithful tithe, preaching to people, etc.

The law of God was not given for the purpose of saving you but rather to show you how you have sinned and are in need of a savior.

“What then? shall we sin, because we are not under the law, but under grace? ____  _______. Know ye not, that to whom ye yield yourselves servants to obey, his servants ye are to whom ye obey; whether of sin unto death, or of obedience unto righteousness?”

The Savior’s righteousness is never given to be a license to sin. It is extended so that God’s law can be established in the heart of the believer. (See Hebrew 8:10).

“But whoso looketh into the perfect law of liberty, and continueth therein, he being not a forgetful hearer, but a _____ of the work, this man shall be blessed in his deed.”

“My little children, these things write I unto you, that ye sin not. And if any man sin, we have an _________ with the Father, Jesus Christ the righteous.”

You may fall into sin, but you have an advocate in heaven, Jesus Christ. He is serving as your High Priest, pleading your case as long as you in sincere repentance turn to Him. Your responsibility is to keep getting up each time you fall. (See Hebrews 8:1-3; Proverbs 24:16).

No matter how sinful your life may be; if you allow it, God’s grace will “much more abound” because you need it more. You can’t out sin God’s grace! Jesus said that “All sin can be forgiven” (Matt. 12:31).

16.  How do I receive this gift of Righteousness?

17.  Have you accepted Jesus’ robe of righteousness as a covering for your filthy rags?