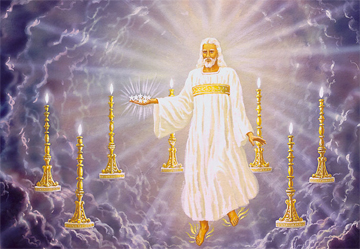 Although Jesus passed into heaven to serve as our Great High Priest (Heb 4:14), He hasn’t forgotten His church. He delivered a personal message for each church throughout the ages. Let’s discover what they are and their significance together.

NOTE: While it is widely agreed that the seven churches were literal churches, many Bible commentators agree that they also represent seven periods in the history of Christian church. The church of Ephesus represents the apostolic church. This period would cover from the resurrection of Christ to the death of the apostles.

“I know thy works, and thy labour, and thy patience, and how thou canst not bear them which are evil: and thou hast tried them which say they are apostles, and are not, and hast found them liars . . . Nevertheless I have somewhat against thee, because thou hast ______ thy _______ love.” (Rev. 2:2-4)

NOTE: Something happened that caused the church to forget the love of Jesus. While it is true that they labored patiently for souls, fought against evil, and did everything to getting rid of false apostleship, the love of Jesus was lacking. As Christians, we must remember to show the love of Christ is all things, even when we are opposing wrong.

NOTE: Jesus reminds them to look in the mirror before dealing with others. He is restating a principle He taught when on earth; “First cast out the beam out of thine own eye; and then shalt thou see clearly to cast out the mote out of thy brother’s eye.” (Matt. 7:5)

NOTE: The Nicolaitians taught that what you did in the flesh did not affect your salvation; just as long as your intentions were good. Jesus said He “hates” this false doctrine. Sadly, most modern churches teach a similar doctrine. They tell their members that God’s law has been done away with or nailed to the cross.

NOTE: It isn’t sufficient to just hear what the Spirit says, you must overcome by doing. James said, “being not a forgetful hearer, but a doer of the work, this man shall be blessed in his deed” (James 1:25).

NOTE: Jesus declared His Deity by taking upon Himself the characteristics that belong only to God: first and last and unable to die (victorious over death).

NOTE: The church was divided to two classes, believers and false believers. While some were persecuted, he others were not. In fact, many of the persecutions of Christians were instigated by the Jews who had not accepted Jesus. They were those that Jesus said belonged to the “Synagogue of Satan.”

NOTE: In prophecy, a day equals a year. See Ezekiel 4:6. The church in Smyrna, which was from 100 to 323, represents the second period of God’s church. From 303 to 313, ten years, under the Emperor Diocletian, God’s church experienced the most bloodies of persecutions.

NOTE: This church period would be from 323 to the establishment of “Babylon the Great” in 538. This period represents the starting point of the false church system which gradually came into being and was firmly established in 538 with the defeat of the Ostrogoth, the last nation that opposed its false doctrine. (See Justinian Code and Siege of Rome. Historically, Protestants churches recognized this false system as Satan’s Seat because it mixed paganism and heretical doctrine with the teaching of Christ. We will discover more about this false system of worship as we study upcoming chapters in Revelation. “Antipas” is best understood as the many that were killed for their faith during this era.

“But I have a few things against thee, because thou hast there them that hold the doctrine of __________, who taught Balac to cast a stumblingblock before the children of Israel” (Rev. 2:14).

NOTE: In the legal system of those days, a white stone declared that you were innocent and a black stone that your were guilty. By the shedding of His blood, Jesus has the authority to declare overcomers innocent. This gives them the right to “hidden manna” and a “new name.” Purpose, in your heart, to get to find out what it is.

NOTE: This church era was from 538 to 1798. It represents the 1260 year period, which God allowed the  “Synagogue of Satan” to rule. Historical, this period was called the “Dark Ages.” Strangely, it was during this period that most monasteries were established, acts of kindness common, and vows of poverty were seen.

NOTE: Jezebel was a wicked queen whose husband was King Ahab. She led Israel to combine sun worship with true worship to God. Revelation uses the name Jezebel to figuratively represent apostate religion or the mixing of pagan customs with Christianity. The fallen church, “Babylon the Great” had this type of worship. Jesus “gave her space to repent of her fornication.” Sadly, “she repented not” (Rev. 2:21). The identity of this fallen church will become clear as we study further.

Spiritual fornication with Jezebel is a serious thing and it has deadly consequences. Error and deception are tools of the devil and will cause all to be lost. Yet, many had long lasting relationship with Jezebel, because children were produced. But there is good news, none need to perish. We have the assurance that “If we confess our sins, he is faithful and just to forgive us our sins, and to cleanse us from all unrighteousness” (1 John 1:8). Why not assure your place in heaven today. Confess your sins and Jesus will forgive and cleanse you

NOTE: When Jesus walked the earth, He sent His disciples out with power over the enemy. They returned excited exclaiming that “the devils are subject unto us” (Luke 10:17). Yet there is a greater gift; Christ Himself, the bright and Morning star. “I Jesus have sent mine angel to testify unto you these things in the churches. I am the root and the offspring of David, and the bright and morning star,” (Rev. 22:16).