Who Changed the Sabbath 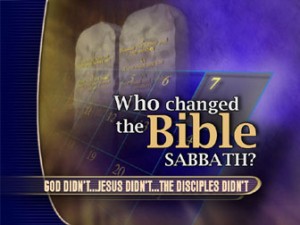 All over the world, many faithful Christians go to worship every Sunday. Yet, no biblical command can be found for worshiping on that day. Aren’t Christian’s commandment keeping Bible readers? How is it that the majority of the Christian world is keeping something that the Bible does not support? Who changed the Bible Sabbath?

1. Did God Change the Sabbath?

NOTICE: This is in the “new heavens and the new earth.” The Sabbath will continue in heaven.

2. Did Christ Change the Sabbath?

3. Did the Apostle Paul Change the Sabbath?

NOTICE: The apostle Paul was converted after the resurrection of Christ. He not only worshipped on the seventh day Sabbath, but he taught Gentiles to do the same.

PRAYER: Father, like never before, send the Holy Spirit. Let Him open our minds and lead us into Your truth so that we can walk in Your statues and receive Your blessing. In Jesus’ name we pray, Amen. 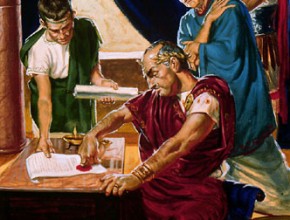 4. WHO WANTS TO CHANGE THE SABBATH?

NOTE: Daniel said a power would come that would think to change the law. Ezekiel describes false worship as one where ministers turn away from God’s Sabbath and violate His laws. And Isaiah said that if a system is not in harmony with the law and the testimony of God, then there is no light in that system.

The only power that has claimed to change God’s Sabbath is the Roman Catholic Church. The first historical references to the observance of Sunday by professed Christians occur in the Epistle of Barnabas (ch. 15) and in Justin Martyr’s First Apology (ch. 67), both dating from about A.D. 150. Both denounce Sabbath observance and urge that of Sunday.

WHERE DID SUNDAY WORSHIP COME FROM?

5. The Roman Catholic Church claims to have created it.

“But the Church of God has in her wisdom ordained that the celebration of the Sabbath should be transferred to “the Lord’s day.” – Catechism of the Council of Trent (Donovan’s translation 1829), part 3, chap. 4, p. 267.

“The Catholic Church…by virtue of her divine mission, changed the day from Saturday to Sunday.” – The Catholic Mirror, official organ of Cardinal Gibbons, Sept. 23, 1893.

“We observe Sunday instead of Saturday because the Catholic Church transferred the solemnity from Saturday to Sunday.” Peter Geierman, The Convert’s Catechism of Catholic Doctrine (1951) p. 50.

PROOF OF THEIR POWER TO CHANGE THE DAY

Accord to the Catholic Church, the proof of their power to change God’s Sabbath day, rest in the fact that the Protestants have accepted Sunday as their day of worship. Catholics say, “Had she not such power, she could not have done that in which all modern religionists agree with her;–she could not have substituted the observance of Sunday the first day of the week, for the observance of Saturday the seventh day, a change for which there is no Scriptural authority.”—Stephen Keenan, A Doctrinal Catechism (3rd ed.), p. 174.

6. Did protestants know that there was no Bible Command for Sunday observance?

“The Lord’s Day is not sanctified by any specific command or by any inevitable inference. In all the New Testament there is no hint or suggestion a legal obligation binding any man, whether saint or sinner, to observe the Day. Its sanctify arises only out of what it means to the true believer.” – J. J. Taylor (Baptist), The Sabbatic Question, p.72.

“The Lord’s day did not succeed in the place of the Sabbath, but Sabbath was wholly abrogated, and the Lord’s day was merely of ecclesiastical institution. It was not introduced by virtue of the fourth commandment. – Jeremy Taylor, D.D. (Church of England), Ductor Dubitantium, part 1, book 2, chapter 2, secs. 51 (1851 ed.), vol. 9, p. 458.

“I Affirm that the first day of the week, or Sunday, as we call it, is not commanded by the Lord Jesus or his apostles, to be observed as a holy day, on which, as on the Jewish Sabbath, no work should be done.” Jas. R. Lithgow, The Sabbath Question as Originally Published in the “Acadian Recorder”, (1861), p. 12, chapter 2.

“Take the matter of Sunday, there is no passage telling Christians to keep the day, or to transfer the Jewish Sabbath to that day” – Harris Franklin Rail, Christian Advocate, July 2, 1942.

“Why do we worship on Sunday? Doesn’t the Bible teach us that Saturday should be the Lord’s Day? Apparently we will have to seek the answer from some other source than the New Testament.” — The Pentecostal Evangel, David A. Womack, Aug. 9, 1959, No. 2361, p.3.

7. What is the Catholic current view on Sabbath?

“The sabbath, which represented the completion of the first creation, has been replaced by Sunday which recalls the new creation inaugurated by the Resurrection of Church.” — Catechism of the Catholic Church, part 3, section 2, chapter 1, article 3, 2190.

8.  How does the Bible tell us to remember the death and resurrection of Christ?

NOTE: Communion Service is given in remembrance.

A CHOICE TO BE MADE

9.  How do you prove which side your on?

10.  What does Jesus call worship that is not according to the Word of God?

11.  When faced with the choice of following man or God, what should one do?

12. What did Jesus say about making a choice?

13. What is the result of serving two masters?

14.  Do you understand that neither the Bible nor Jesus changed the Sabbath and that God still commandments true worship?