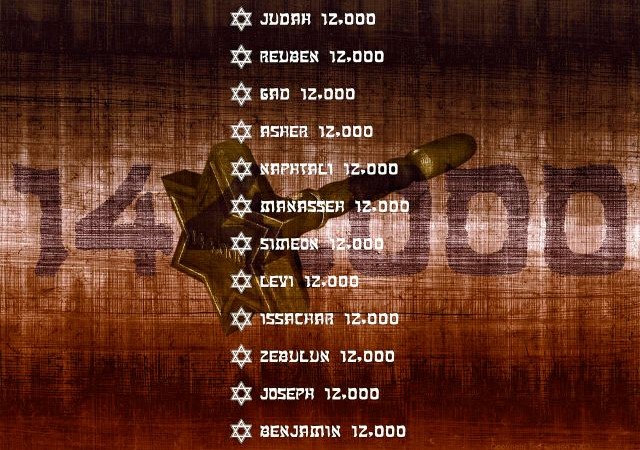 After receiving the vision of the seven seals, John was given another vision. The 144,000 are the main subject of this vision. Let’s discover what John saw as the Bible reveals more details about the last days.

“And after these things I saw four angels standing on the four corners of the earth, holding the four winds of the earth, that the wind should not blow on the earth, nor on the sea, nor on any tree.” (Rev. 7:1)

NOTE: Winds in Scripture often represent strife or warfare. The prophet Daniel said, ” I saw in my vision by night, and, behold, the four winds of the heaven strove upon the great sea,” (Daniel 7:2). With that understanding, God’s angels are controlling strife and warfare until God’s work and His everlasting gospel goes to all the world.

“And I saw another angel ascending from the east, having the seal of the living God: and he cried with a loud voice to the four angels, to whom it was given to hurt the earth and the sea,” (Rev. 7:2)

NOTE: In ancient times a “seal” was used as a signature is used today. Isaiah 8:16 says, “Bind up the testimony, SEAL the LAW among My disciples. In Ezekiel 20:12 it is written: “Moreover also I gave them My Sabbaths, to be a SIGN between Me and them, that they may know that I am the LORD that sanctify them.”

For a seal to be official it must have the name and title of the person the seal belongs to. For example, the presidential seal has the name and title of the president of the United States. The fourth commandment – the one regarding the Seventh-day Sabbath is the only one of all the ten in which are found both the name and the title of the Lawgiver. It is the only one that shows by whose authority the law is given. Thus it contains the seal of God, affixed to His law as evidence of its authenticity and binding force. Pointing to God as the Maker of the heavens and the earth, it distinguishes the true God from all false gods. The seal of God also represents the character of God and informs us that the ten commandments are the laws by which all will be judged. (See James 2:12).

“Saying, Hurt not the earth, neither the sea, nor the trees, till we have sealed the servants of our God in their foreheads” (Rev. 7:3).

NOTE: The forehead represents the mind. The ones who are sealed are those who have settled in their mind that they will obey God rather than man or culture. The apostle Paul informs us that it is in the mind that the great battle for man’s soul takes place. It is in the inner citadels of men’s minds, where evil fortifications, entrenched habits of sin and self reside. The battle is one of truth against error, the knowledge of God against ignorance and superstition, true worship against all forms of idolatry, liberty in Christ against the bondage of sin, holiness against wickedness, righteousness against unrighteousness, Christ’s control against that of Satan. (See 1 Cor. 10:4, 5). Some of those who receive the “mark of the beast’ will receive it in their foreheads as well. (Rev. 13:16).

Jesus reminds the Christian that it is his work to lay siege to the foe, destroy his defenses, and drive him out into the open. Jesus assures us that we can. He says, “the gates of hell will not prevail” (Matt 16:18).

“And I heard the number of them which were sealed: and there were sealed an hundred and forty and four thousand of all the tribes of the children of Israel” (Rev. 7:4).

NOTE: This number can be taken as a literal number, or a symbolic number. Some numbers in Revelation are symbolic ones, others are literal ones. For example, the number seven is used as a symbol for perfection as when Jesus is described as having “seven horns and seven eyes” in Revelation 5:6. Eyes are a symbol of knowledge. Seven eyes would mean that Jesus has perfect knowledge or an omniscient. Horns are a symbol for power. Seven horns would mean that Jesus has perfect power or is omnipotent. Likewise, the number 144,000 is 12,000 times 12. There are 12 tribes of Israel. There are 12 gates in the New Jerusalem. 12 thousand from each tribe are sealed. 12 angels guard the gates of the New Jerusalem. (Rev. 21:12). The New Jerusalem has 12 foundations. (Rev. 21:14)

Critics of the number being literal say that if we take that position, we must also take literally everything it says about the 144,000, which causes some problems. For example, the tribes mentioned in Revelation 7 differ from the 12 tribes mentioned in the Old Testament. Second, all from these tribes were Jewish. That would mean that only Jews would be included in this group. Third, we must take literally the fact that the 144,000 are also literally “virgins” as it says in Revelation 14:4. That would eliminate any married person. Fourth, if the number was to be exactly 12,000 from each tribe, then that would mean that the Lord predestines only a certain number, and once that number is reached, that is it. But the Lord says, “whosoever will let Him come,” (Revelations 22:17). Fifth, there were actually 13 tribes. The tribe of Joseph was replaced with Manasseh and Ephraim. (Gen. 48:5). We usually only mention 12 because the Bible tells us not to number Levi. It says, “Only the tribe of Levi you shall not number, nor take a census of them among the children of Israel” (Numbers 1:49).

Rather than worry about the number, we need to have the character of the 144,000. They “follow the Lamb whither soever he goes” (Rev. 14:4). The 144,000 are special because they can “sing the song of Moses the servant of God, and the song of the Lamb” (Rev. 15:3). They have an experience that no other group has ever had because they will be translated from the earth, from among the living when Jesus returns. They will go through the scenes of the least days and have “gotten the victory over the beast, and over his image, and over his mark, and over the number of his name,” (Revelations 15:2). By God’s grace, let us pray to be among the 144,000 whatever the number turns out to be.

Ellen White says, “It is not His will that they shall get into controversy over questions which will not help them spiritually, such as, Who is to compose the hundred and forty-four thousand? This those who are the elect of God will in a short time know without question.” –1SM 174 (1901). {LDE 269.1}

“After this I beheld, and, lo, a great multitude, which no man could number, of all nations, and kindreds, and people, and tongues, stood before the throne, and before the Lamb, clothed with white robes, and palms in their hands,” (Rev. 7:9)

NOTE: From early Christian times commentators have been in disagreement regarding the relationship of this multitude to the 144,000. Three principal views have been held.

One view holds that the 144,000 and the “great multitude” of the present verse both describe the same group, but under different conditions, and that vs. 9–17 reveal the true identity of the 144,000. According to this view, vs. 1–8 portray the sealing of the 144,000 to prepare them to stand through the terrors that attend the coming of the Messiah, whereas vs. 9–17 show them afterward rejoicing about the throne of God in peace and triumph. Those who hold this view believe that the apparent differences between the description of the “great multitude” and that of the 144,000 are not differences, but explanations.

A second view emphasizes the differences between the 144,000 and the “great multitude.” One is numbered, the other cannot be. One represents a special group, “the firstfruits unto God and to the Lamb” who “follow the Lamb whithersoever he goeth” (ch. 14:4), the other, the remaining triumphant saints of all ages.

A third view represents the “great multitude” as the entire company of the redeemed, including the 144,000.

Here is what Doug Batchelor, President of Amazing Facts says about the 144,000 and who will be saved in the Last Days.

“But praise God! Though the 144,000 might be an exact number, the Bible does not teach they are to be the only ones saved in the last days. If we read on in Revelation 7:9, immediately after the listing of the tribes and the 144,000, the prophet sees “a great multitude which no one could number, of all nations, tribes, peoples, and tongues, standing before the throne and before the Lamb, clothed with white robes, with palm branches in their hands.”[2]

The robes are indicative of their character that they have washed pure in the blood of the Lamb, and by His power. (Rev. 7:14). It also says that they “came out of great tribulation.” This great multitude includes many that have gone through the tribulation of the dark ages, that great period when the people of God were persecuted and killed by the devil and his agents. It also can include all those who will go through the last great tribulation before Jesus’ return. (Rev. 6:9-11).

“And cried with a loud voice, saying, Salvation to our God which sitteth upon the throne, and unto the Lamb. And all the angels stood round about the throne, and about the elders and the four beasts, and fell before the throne on their faces, and worshipped God, Saying, Amen: Blessing, and glory, and wisdom, and thanksgiving, and honour, and power, and might, be unto our God for ever and ever. Amen.” (Rev. 7:10-12)

NOTE: Heaven might not be as quiet as some think as the redeemed cry a loud in praise and joy to the Lord.

“They shall hunger no more, neither thirst any more; neither shall the sun light on them, nor any heat. For the Lamb which is in the midst of the throne shall feed them, and shall lead them unto living fountains of waters: and God shall wipe away all tears from their eyes.” (Rev. 7:16, 17)

Friends, be faithful to Jesus now. Live for Him. Serve Him because victory and peace belongs to those who do and His reward is something you don’t want to miss!